What a busy 6 weeks it has been!  Since starting teaching part time at Rowville (fantastic school, btw), I have been flat out!  The Needlework Boutique has really been busy, starting with the October Online Needlework Show.  Loads of new charts were purchased.  I am waiting for two orders to be delivered, but in the meantime I am starting to upload these orders to the website. 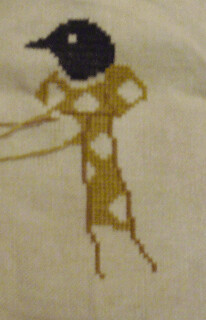 This was followed by our inaugural Stitch In, with 3 lovely ladies attending.  The Stitch In kind of caught me out, as no one had responded to the newsletter, so I assumed it was going to be a fizzer, then DH had a Cricket Coaching Seminar that he needed to attend suddenly make an appearance.  I had not prepared the venue, and needed to be in the house anyway for the kids, so we moved it down to my front room.  All I can say is thank goodness my youngest is such a cutie for others – she was a real pest that night!  But, my lovely guests went away happy, so that is a relief.   Further Stitch In’s are planned (in the bungalow), with more details in the newsletter.

This was followed by our Retreat.  I had considered canceling it when I only had 3 people sign up, but decided that the best thing to do was to go ahead with it, especially as I did not want to disappoint Jo again, and I knew how much the other two ladies were looking forward to it.  And boy am I glad that we went ahead with the Retreat.  It was such a fun weekend.  As promised, I took the shop with me, so it was sitting there, tempting the guests all weekend.  After a full day at school, I arrived home to pack the car as quickly as I could.  With the shop safely packed in the car, I then turned my attention to my personal items.  First on the list was what projects would I be working on over the weekend.  Of course I went with Ida Mae Crow, but I also included other projects … just in case!  Then it was on to decideing what clothes to take.  October can still be quite cool, especially at night, up at Narbethong, so I made sure that what I took would be suitable for both the cooler weather and warmer weather.  And it was then off to Narbethong. 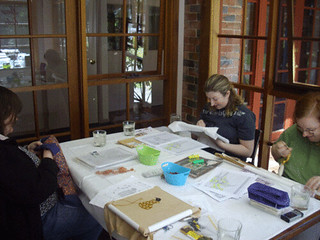 The trip was uneventful, though I did enjoy seeing the recovery of the bush leading into Narbethong.  With the beautiful September rain that we received, the bush had started regenerating in earnest, with various pockets being particularly lush and green.  Once again the closeness of the scorched land to Healesville shocked me, but I was awestruck with the strange beauty of the recovering bush.

From the moment I arrived at the Black Spur Inn, I was impressed with Diane, her husband and her fantastic team!  From the girls at reception, to the Chef, we had nothing but amazing service!  On arrival, I bought myself a pub meal for dinner, Chicken Parmagiana.  Now we all know that a pub meal is usually just a basic meal, right?  Well, not at the Black Spur Inn.  It was the BEST Chicken Parmagiana that I have EVER had!  OMG!  I had died and gone to heaven!  And the bunk room we were in – it was a 4 bed room and it was so comfortable!  The only negative was that both Jo and I are avid readers and there was only one overhead light – and I was exhausted!  So, on the Saturday night, out came the Daylight Travel Lamps. LOL!

The retreat was all about relaxation and unstructured stitching time, so on the Friday night, the 4 of us did a lot of talking, then I set up the shop (in a bit of a hurry).  We continued to talk, before calling it a night.

Saturday morning, we had breakfast in the restaurant section of the Inn.  That was our first introduction to the Chef, but not to his amazing cooking!  After breakfast we adjourned to the small room where we had our gathering, and spent the day in there stitching away.  Gayle and Bek were starting a project that they had bought several years ago, while Jo did some more work on her Cirque des Cirque and out came Ida Mae!  From then on we basically only moved to have something to eat, visit the ladies or go to bed! 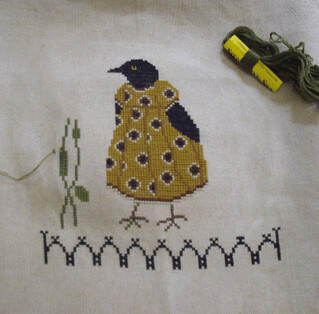 The food!  It was amazing!  From the pancakes for morning tea on the Saturday (so light and fluffy) to the Garlic Prawns for Lunch on the Sunday, it was just one mouth watering dish after another!  And the Chef was fantastic.  He would stand in the doorway of the room we were stitching in and ask us what we wanted for our meal.  We generally left it up to him, as he is such a brilliant man in the kitchen.

After a full day of stitching on the Saturday, and with very full stomachs, we had the best fruit compote with breakfast that I have EVER had (sorry Stacey, but I have never tasted yours!)  Following this we adjourned back to the stitching room for another morning of stitching and gossiping.  Ida Mae made a fantastic progression, from being a partially dressed head and body, to a full crow, to one behind a fence and then one that had eaten the heads off the flowers, I got a lot done. Jo, Bek, and Gayle also got heaps done, with both Bek and Gayle making significant progress on their projects (I can not remember the name of the design, but I know it well.) and we were all hoping that Jo would get Cirque finished.  Not quite. 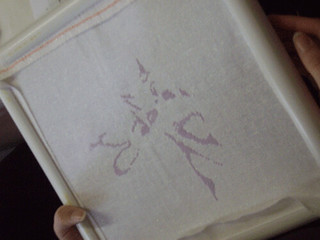 As we all had to get home on Sunday afternoon to prepare for the week ahead, we adjourned after lunch (with me repacking my car with all the shop stuff – all those boxes fit very nicely into the Jazz – I will have to take a photo sometime!)  heading back to reality.  But not before deciding that the retreat will be repeated in May 2010, back at the Black Spur Inn.  I returned home to start planning for the next few weeks and next year’s retreat!

One thought on “Retreat and more”